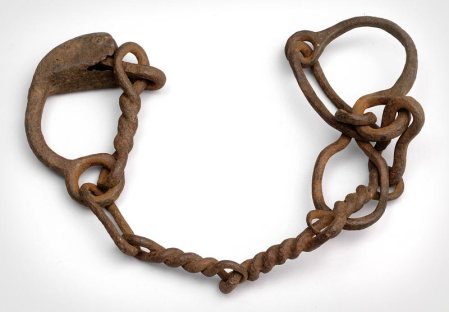 I purchased a set of slave shackles once from the estate of an old Virginia plantation a few years ago.  I wanted to honor the experiences of ancestors whose names I do not know.  I wanted to remember the men, women, and children who choose life when death might have been easier.

I tell myself they endured untold indignities for me and for my children.  They held their inner soul and spirit inviolable to the transgressions of their circumstance.  They engaged in the ultimate rebellion against all tyranny–hope.  And they armed themselves with knowledge, the one weapon their oppressors feared above all others.

I told my students about them the other day.  In tenth grade, we are reading Things Fall Apart by Chinua Achebe, a work I did not discover until college.  We are still in the first part of the book, and we are learning about the Ibo in the 1890s, and Okonkwo, the flawed hero whose village life will all too soon be ripped from his heart.  He reminds me of an uncle by marriage who marched through life with heavy boots and a singular focus which both empowered and handicapped his gait.

I have done my best to set the stage for my students.  I play traditional and modern music from Nigeria during warm-ups.  I show photographs capturing what Umuofia, Okonkwo’s fictional village, might have looked like.  We viewed two introductory scenes from a filmed version of the book I found on YouTube.

I tried hard to help them imagine how life might have felt in pre-colonial Nigeria.  “Haven’t you ever wondered,” I asked a room full of black and brown faces, “how life might have been if your distant relative had not been captured or sold? Let’s use this book as Achebe wanted and see in these people and their beliefs some small piece of ourselves.”

“But I’m not black,” one Latino male student said.

“No, you are not.  But there is something basic and human about village life, rural life, when you ate what you grew or caught, and people feared and honored the power behind wind and rain and lightening.  Somewhere in our DNA, all of us have faint memories of torch-lit nights, sacred rituals, and life lived outdoors.  Just image Costa Rico before the explorers  came.”

And so we began.  I supplied summaries and study guides for each chapter and interspersed audiobook recordings with in-class readings.  We used our prior work on conflict to try and map Okonkwo’s journey and point-of-view.  This week, we will take a closer look at proverbs and the role of women in traditional Ibo society.  I give reading quizzes every two classes or so.  “This is your chance to lift your grade,”I said.

Despite all this, some students remain unconvinced.  “This is boring,” one girl complained when we started the book.  She is a reader, but prefers urban tales about sex and heartache.

“Look,”  I said.  “You need to read about many things and people, not just Peanut and who’s ‘dropping it like it’s hot.’  Besides, if you only read things where the biggest word is “MF’er, then it’s time for an  upgrade, don’t you think?”

There is laughter and nodding, but I can tell everyone is not yet committed.  This initial reticence always happens when we turn our attention to a longer work.  I realize I need something stronger to pull everyone in–especially some of the boys.

Last week, after the Dr. King holiday and two snow days, I postponed a scheduled quiz on Chapters 1-4 and instead posted two large signs in the front of the room.  One read “Yes,” and the other “No.”  “Now, I want you to be completely honest with me,” I began.  “If you hate the idea of reading this book, I want you to come stand up here in a neat line under the “No” sign.  It’s not going to get you out of reading, but I do want to see how you feel.  If you are looking forward to reading it, stand under “Yes.”

In my second period class, one overflowing with basketball players, about twelve young men raced to line up under “No.”  They chuckled and jostled for position.  They are a playful, tight knit group, and I admire their energy.  Two of the girls in class rose and walked to the “Yes” sign, while the remaining handful of students, male and female, remained in their seats, waiting to see what this game was all about before they committed to either camp.

“Fine,” I said, before moving other to the few students who dared to declare their enthusiasm for the task ahead.  “Thank you for your willingness to embrace the book and all it represents,” I said.  “You can sit down.”  One of the tallest boys in the “No” line made a sucking sound, which is what they do when someone, especially me, compliments another student out loud.  We all laughed.

“Ok, ok,” I continued.  “Now, here, in this line, we have those who are not looking forward to reading Things Fall Apart.  I also appreciate your honesty,” I said.  “But I want you to look at this row.” I pointed to the dozen athletic, young men as a few took a bow.  “Now, imagine we could enter a time machine and go back, say two hundred years, to 1814.  Let’s say we go back to Virginia, just across the Potomac, or even further down to South Carolina, or Alabama, or Mississippi.  What might this line resemble?”

The students grew quiet and stared straight ahead.  “It might help if you imagine them half-naked and standing on a platform before a crowd of white men with money in their pockets.”

“Exactly,” I said, a bit louder than I intended.  Without prompting, the young men slowly moved back to their seats.

“There is a reason so much time and effort went into keeping slaves illiterate.  Once a man can read, once a man has access to knowledge, he cannot be enslaved.  At least, not for long.”

I walked over to one young man in the rear I have been trying to ignite all year.  I can see in his eyes the wheels of his mind.  They move quickly, but his work does not.  He misses too many assignments, and his grades are nowhere near where they should be.  “So, Mr. Graham,” I asked.  “Are you a black man–a free man–or a slave?”

He looked up at me with a mix of anger and agitation.  “A black man,” he said.

“Then let’s read,” I said to him and the class.  When I later shared his reaction with a white colleague in the teacher’s lounge, he smiled and then asked, “I wonder how it would go over if I tried that?”  We both smiled knowingly.

“Not too well,” I acknowledged.  “But, hey, we all have to do what we can.  This is just something I can.”  I said nothing about my growing doubts about the approach.

Today, during last period, the school began airing “shout outs” during announcements.  The shout outs could be sent from students  to whomever they wished to thank.  Near the end, after a number had been read citing teachers and fellow students who had been helpful in some way, Mr. Graham, one of my second period students, sent one to me.  I missed most of it as the students in my class jeered and cheered, but I still remember the last part.

“Thank you, Mr. Roberts, for not giving up on me.”

teachermandc is Mark E.P. Roberts, a middle-aged, high school English teacher entering his ninth year of instructing young minds. This blog is an attempt to capture the challenge of teaching and the essence of learning. At a time when DC has become the epicenter of educational theory, this blog will keep its preferred focus on students in an somewhat typical DC high school. I have taught in both public and private schools. To date, 95% of my students are of color. All names have been changed, and complaints about in-house politics will be avoided. Hope you enjoy.
View all posts by Mark E.P. Roberts →
This entry was posted in Uncategorized and tagged Chinua Achebe, slave auction, slave shackles, teacher shout outs, the power of yes, Things Fall Apart. Bookmark the permalink.

2 Responses to Shackles and Shout Outs